Archive for the ‘republican’ Category

“Mine Gas Escapes from Limbaugh‏”

Rush Limbaugh is at it again…  I typically ignore everything from Rush Limbaugh as I know his credibility is none. The guy I take lunch with everyday loves to make me listen to the Rush Limbaugh show which does nothing but get my blood boiling.  Sure I could tune out the radio as we drive – but what would be the fun in that?  It is nice to hear extremist sometimes just to keep myself in check and down to reality.  But today I got an e-mail from the AFL-CIO, one of the many e-mail list I subscribe too, talking about the Mine Tragedy in West Virginia.

The article from the AFL-CIO Blog outlined how Rush Limbaugh was once again wrong.  Everyone knows that the Massey Energy Big Branch mine was not union.  Just read the blog post from the AFL-CIO and you will see.

Limbaugh Lies About Big Branch Mine: No, Rush, It Wasn’t Union

It was Sen. Al Franken (D- Minn.) in his previous incarnation as an author and comedian who called Rush Limbaugh “A big fat liar.” Well, others can address the first part, but Limbaugh himself has again offered solid evidence about the liar part.

Last week, Limbaugh lambasted the Mine Workers (UMWA) for not protecting their members who, he claimed worked at the Upper Big Branch mine in Raleigh County, W.Va., where 29 coal miners were killed when the Massey Energy Co. mine exploded.

Of course as we all know, and has been widely reported in mainstream media–and even on  Fox News–Upper Big Branch was non-union coal mine. While he never acknowledged his mistake, at least he piped down for a few days.

But yesterday, with a full bag of gas at the ready, Rush claimed he had irrefutable facts to back him up, that UMWA did certainly represent the miners at Upper Big Branch. He said the National Labor Relations Board (NLRB) had ordered Massey to hire union coal miners.

There were union workers at this mine…You people, it’s been 21 years. At some point you are going to learn: If you go up against me on a challenge of fact, you are going to be wrong. It’s just that simple.

Let UMWA President Cecil Roberts throw the challenge flag on this one.

Wrong again, Rush. The decision you refer to was AT ANOTHER MINE! And, Massey is appealing that decision, meaning the workers who were discriminated against at the Cannelton mine (in another county from the Upper Big Branch mine) have yet to reclaim their rightful jobs as the NLRB ordered.

Those are the facts. Who’s wrong now, Rush?

While Limbaugh may have lost a few pounds, that liar part still fits quite snuggly.

According the Federal Railroad Administration the “vision is to transform the nation’s transportation system, by rebuilding existing rail infrastructure while launching new high speed passenger rail services in 100-600 mile corridors that connect U.S. communities. Similar to how interstate highways and U.S. aviation system were developed in 20th century: partnership between public sector and private industry, including strong Federal leadership that provided a national vision”.

The proposal was released yesterday (April 17, 2009) and by no means definite. Funds have been allocated to the tune of $8 Billion initially and $1 Billion annually over the next five years. These funds are considered a down payment on what is surely to require many more Billions of dollars from state and local governments. First round Federal Grants are expected to be awarded by the end of Summer 2009.

Obama’s administration is promising a transparent approach in development and outlines what appears to be a three phase plan to implement based on merit and benefits.

Ten Major Corridors have been Identified.

Also, opportunities exist for the Northeast Corridor (Washington, Baltimore, Wilmington, Philadelphia, Newark, New York City, New Haven, Providence, Boston) to compete for funds for improvements to the nation’s only existing high-speed rail service, and for establishment and upgrades to passenger rail services in other parts of the country.

The proposed high speed rail system is intended for immediate economic relief creating new jobs, specifically in the construction and manufacturing sector.  Proposals have also been made that this system will be a green system.  A date for breaking ground on the project was not proposed in the announcement.  Planning and funding application time line goes through February of 2009.  So the immediate impact on Middle-class workers isn’t likely until years to come.

From the Federal Railroad Administration on the Gulf Coast Corridor:

Overview: The designated Gulf Coast Corridor would use New Orleans as its hub, with three spokes reaching (1) Houston, (2) Mobile, and (3) Birmingham and Atlanta. At Atlanta, the Gulf Coast Corridor would connect with the Southeast Corridor to Charlotte, Richmond, Washington, and Northeast Corridor points. At present, no corridor-type intercity rail service operates in this corridor, although Louisiana has been working with Amtrak and the Kansas City Southern to initiate a commuter service between New Orleans and Baton Rouge. The FRA has made study grants to the Southern High-Speed Rail Commission (SHSRC, formerly known as the Southern Rapid Rail Transit Commission), which comprises appointees of the three member states (Louisiana, Mississippi and Alabama).

For Further Reading on the High Speed Rail system from the Federal Railroad Administration:

The Guradian is reporting that Hilary Clinton is going to accept President Elect Barack Obama’s appointment to Secretary of State appointment. 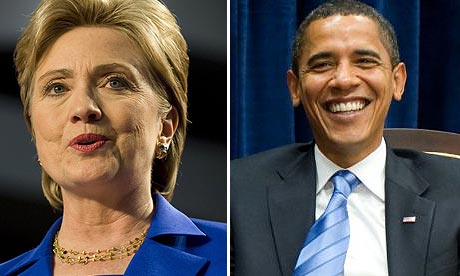 Hillary Clinton plans to accept the job of secretary of state offered by Barack Obama, who is reaching out to former rivals to build a broad coalition administration, the Guardian has learned.

Obama’s advisers have begun looking into Bill Clinton’s foundation, which distributes millions of dollars to Africa to help with development, to ensure that there is no conflict of interest. But Democrats do not believe that the vetting is likely to be a problem.

Clinton would be well placed to become the country’s dominant voice in foreign affairs, replacing Condoleezza Rice. Since being elected senator for New York, she has specialised in foreign affairs and defence. Although she supported the war in Iraq, she and Obama basically agree on a withdrawal of American troops.

Clinton, who still harbours hopes of a future presidential run, had to weigh up whether she would be better placed by staying in the Senate, which offers a platform for life, or making the more uncertain career move to the secretary of state job.

As part of the coalition-building, Obama today also reached out to his defeated Republican rival, John McCain, to discuss how they could work together to roll back some of the most controversial policies of the Bush years. Putting aside the bitter words thrown about with abandon by both sides during the election campaign, McCain flew to meet Obama at his headquarters in the Kluczynski Federal Building, in downtown Chicago.

Obama, speaking before the meeting, said: “We’re going to have a good conversation about how we can do some work together to fix up the country.” He said he also wanted to thank McCain for his service to the country.

Asked by a reporter whether he would work with Obama, McCain, who has long favoured a bipartisan approach to politics, replied: “Obviously”.

Sources on both sides said Obama did not offer McCain a cabinet job, but focused on how the senator for Arizona could help to guide through Congress legislation that they both strongly favour.

Given Obama’s status as president-in-waiting, the two met in a formal setting, a room decked out with a US flag, and were accompanied by senior advisers. Obama appeared the more relaxed of the two, sitting with legs crossed, smiling broadly and waving to reporters, while McCain sat stiffly, with a seemingly fixed grin.

Although the two clashed during the election campaign over tax policy and withdrawal from Iraq, they have more in common than they have differences. They both favour the closure of the Guantánamo Bay detention centre, an increase in US troops to Afghanistan, immigration reform, stem cell research and measures to tackle climate change, and oppose torture and the widespread use of wire-tapping.

Although Democrats made gains in the Senate in the November 4 elections, they fell short of the 60 seats that would have allowed them to override Republican blocking tactics and will need Republican allies to get Obama’s plans through. This was highlighted today when the Democratic leadership in Congress announced that a broad economic stimulus package Obama sought was not likely to be passed because of Republican opposition.

Obama confirmed at the weekend that he would offer jobs to some Republicans. One of the names that crops up most often is Chuck Hagel, the former Republican senator who is a specialist in foreign affairs and a critic of the Iraq war.

Bill Clinton’s relationship with his foundation may prove to be a bump in the road during Senate Confirmation in addition to the Republican blocking tactics. CNN.com is reporting Bill maybe the biggest problem in filling Obama’s cabinet seats. None-the-less this is a fitting role for Senator Clinton.  With almost two decades of foreign policy experience the Clinton’s would be a welcome face in Embassies around the world.  Bill Clinton may have to abandoned his involvement in international business for the duration of Hilary’s Department of State administration.  Seeing how the conflict of interest is no less than Dick Cheney’s ties to the oil and gas industry all that needs to be established is a clear definite separation.  Since most of Bill’s business ventures are charity based the conflict should be genuine in nature but will still need to be abandoned.

No doubt the successful nature of Bill’s venture stems from name recognition and him being a former President since he is acting in no official US Government manner nothing can really be said.  But if he is the husband of the US Secretary of State it could prove to undermine the intentions of the US State Department.  One way to handle the conflict would be to merge organizations and release managment of all interest to another aide organization.  Or could just be like Dick Cheney and step down as CEO of the organizations and maintain a vested monetary interest which will no doubt cause as much trouble as Cheney.  The best and easiest thing to do would be to end all ties.

7 Days from this posting polls will almost be closed on the west coast and we will likely be announcing the next president, congresspersons, senators, and local officals.

DON’T FORGET TO VOTE.  Or go vote absentee now to avoid the hassle of going to the poll or the risk something happens that prevents you from voting on Election Day.